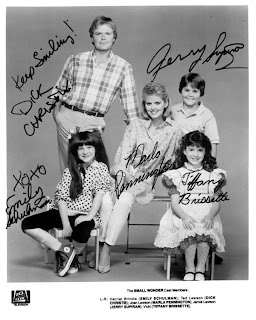 This really gives me Nostalgia. I watched the series in three languages. Tamil, Hindi and English. The characters are still in front of my Eyes. The names are also catchy.

The Series involves just two families with some guest appearances. The characters are namely

Ted Lawson - Creator of VICI the ROBOT. A robotics engineer. He creates VICI in the business point of view , but in future it/she becomes a part of his family.

Joan Lawson - Mrs.Ted Lawson. Who loves Jamie and VICI. She considers VICI as her daughter rather than a ROBOT.

Harriet Brindle - The Girl Next Door who has a crush on Jamie.

Brandon and Bonnie Brindle - Harriet's parents. They have a common practice of peeping in to others' privacy

There are just 8 characters in the series.But still it never lost my attention. Missing it very badly. Hope there should not be any remake which will never be like the original one.