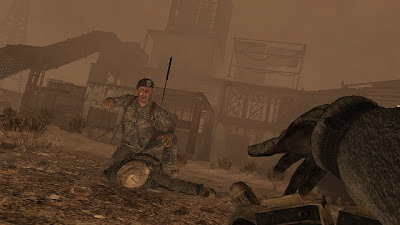 Sorry , i took a couple of hours extra to complete this game due to lack of Time. Overall a five hour game in recruit level. The start was a little sluggish , but the climax was a typical tamizh movie climax, portraying an eternal hero who fights after he has been stabbed.

As usual Call of Duty, modern warfare 2( COD MW2) or so called Call of Duty 6, is lacking the cut scene feature ,which i consider as critical for better understanding of the story. Every mission is really good to play, but it appears very discreet to play the next mission as the story part is conveyed in the loading screen, which almost lasts some seconds in my AMD Phenom quad core processor. So most of the time, without having patience to control the anxiousness, i press escape to get in to the play, knowing very little about what am going to do.

Call of duty modern warfare 1 was a bit clear as the difference between your team and the enemies was apparent. But here in MW2 , most of the time my mission failed with the message "Friendly fire will not be tolerated".

Surprise to all who play, COD 6. You are going to see Captain price again with his follower SOAP, whom you played as in COD4. Unfortunately, you (Sergent Roach) will die eventually in the near climax. The game/story will be continued by Captain Price and Sgt.Soap.

Usually, this game receives the award of most pirated game. Am sure that , even this year, it might get it says my intuition.

Worth playing once. But still i dont understand why there is no Left handed weapon alignment in any of the FPS games. Was struggling to aim initially.