July 11, 2009
Today i just logged in to my blog, and glanced through the homepage. Shocking!! I was forced to see a large image which looks like the one below. 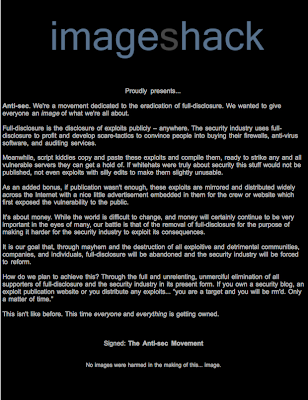 First i was angry about what image shack did to me replacing my image based back links. But on making deep research on the stopper, i got to know that Image Shack is experiencing a threat from these group of people, suspected to be hackers with the Title Anti-Sec.They want to publish themselves to the internet society about their goal and target. Unfortunately, they caught image shack ,one of the biggest image hosting website.

"What they actually do?"

They have hacked image shack and replaced most of the images , with their images(shown above). So if the owner of the image, linked it to his or any website, the original image will be replaced by their image.This is what happened

"What could be the Solution?"

We are in no way can help this. Is image Shack which got in to trouble, where the Anti-Sec group SPAM them. Until the issue is solved we need switch to some other image servers.