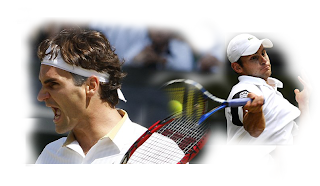 Federer says "He is on always" not through words but actions.

The Final between Swiz and the American was a big time match. Filled with tension and curiosity.

Who is going to clinch the title? The Rocket Serve Roddick or the Grass Emperor Federer? The question is answered yesterday. The Emperor retains the throne again.

The Dramatic match was going pretty decent but no big shots or breath taking rallies were witnessed.
Good number of Aces from both the Players entertained the crowd well, but Roddick proved himself a tough Missile to Counter.

As this is not a normal federer match which ends in Straight Sets are restricted to two, the match went a little sluggish in the middle with
double faults, unreturned serves and huge rallies with no big hits.

The Score also tells something about the match.

Roddick was always strong and dominant at his side. But federer was Dominant+0.1.

Even after losing 2 consecutive and close sets , the fourth set was really a big gate opened for Roddick.

The 21 shot rally is one of the Highlights of the match(Damn! i missed it).

Federer turned the final set towards him to claim his 15th Grand Slam Title.

Federer did not disapoint Pete Sampras , as he had his presence through out his match.

Pete Sampras in turn did not disappoint the audience by Praising Federer.