Godfather II - The game and the Movie 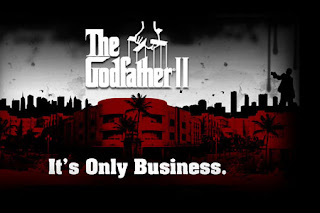 Godfather II , one of the most awaited game , is released in the last quarter.

The Game is really good and a must play game for All Gamers.

The Characters in the game almost animated exactly like how they are in the Movie.

Michael Corleone (Al Pacino ) Must have been made a bit closer.

Dominique who takes the Position of Don in the Game is found nowhere in the Movie.

None of the Female Characters are depicted.You could see some servant maids around.

1. Very first Scene of the Game Godfather II is Hyman Roth's birthday at Cuba. Where Firecracker is placed in the Cake and a easy from Roth containing the phrase
"We need real partnership with ther Government"

The Same Scene comes in the movie some where in the Middle of the Movie.

2. The Court Scene , where Michael Corleone is accused. Franklin Pentangeli who rolls back on seeing his brother.

3. The Cop who is tricked in the case of the Prostitute's murder and bargained by Tom hagen.


4. Assassination of Hyman Roth in the Airport. Which will be done by Dominic in the Game is done by some other guy in the Movie.

5. Assassination of Fredo in the Boat is made the Same like in the Movie.